You are here: Home / Equestrian / When Is a Horse Not a Horse? Roman Horse Jewelry 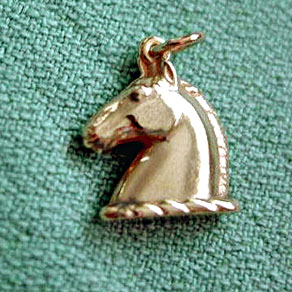 When is a horse not a horse?  When it’s the famous Pompeii horse, who’s skeleton was discovered, along with the skeletons of lots of other animals and people who were caught in the aftermath of Vesuvius’ eruption.

That’s not to say that the Pompeiians and those from nearby Rome didn’t love their horses.  At least five sets of remains confirmed to be horses have been found at the Pompeii site.  And Rome?

Well, once the emperor Caligula had a horse, Incitatus, that  he loved so much he fed him only golden barley — and promised that he would some day make the horse a member of the Counsul that ruled the empire.   The day before Incitatus was scheduled to appear in some games, Caligula sent advance troops through the neighborhood where the horse was stabled, cautioning them to be quiet and not disturb Incitatus’ sleep.

Imagine how many show riders would do the same if they had a few legions of troops at their disposal!

The proud spirit and passion of the Roman horse is a fine subject for jewelry.  We’re really fond of this 14K Gold Roman Horse Head Charm which can be worn as a pendant or added toward a charm bracelet. This charm is also available in silver, if you prefer silver.  Check out the proud posture, the muscular neck, the alert gaze.  This is everything that the Romans appreciated in their horses — and that we love about the horses that share our lives today! 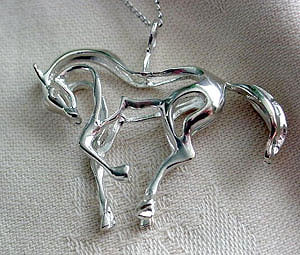